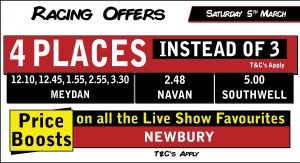 It’s a bumper Saturday of racing in the UK & Ireland, with five meetings this afternoon being followed up by evening racing on the all-weather at Southwell. Lingfield, Kelso, Newbury, Navan, and Kelso are this afternoon’s offerings with some lucrative prizes to be handed out across the tracks.

Of the feature events to keep an eye on today, Kelso’s second race of the afternoon is the Grade 2 Premier Novices’ Hurdle ovder 2m2f at 1.32pm. The unbeaten North Lodge (5/2) could be set for the Ballymore Novices Hurdle at Cheltenham in 10 days time if he can maintain his 100% record for trainer Alan King. However, the in-form partnership of Donald McCain and Brian Hughes will give King’s charge plenty to think about with Richmond Lake (3/1), who carries the colours of the late Trevor Hemming’s, having been second to major Ballymore contender Jonbon when last citied.

The Listed Premier Chase takes place at 2.40, at the Scottish track, with Kim Bailey’s Espoir De Romay (5/4) the current fav, having had Chantry House in potential trouble only to crash out late in the day in the Grade 1 Mildmay Novices Chase at Aintree two starts back. Olly Murphy’s popular 8-year-old chaser, Itchy Feet (4/1) wears first-time blinkers while Windsor Avenue (11/2) and Big River both (7/1) arrive after last time out wins, making this a competitive affair.

Up next, at 3.15, is the £100,000 Morebattle Handicap Hurdle with last season’s Grade 1 Tolworth winner, Metier a solid 10/3 fav having justified favoritism in a Lingfield handicap last time out. With the Irish Cheltenham charge fast approaching, both Jessie Harrington and Stuart Crawford are represented in this valuable handicap over 2 mile, with Autumn Evening (11/2) and Saint D’oroux (11/1) making the trip across.

Multiple Grade 1 winner, Buveur D’Air (8/1)  also lines up for this contest with an apparent eye on the Aintree Hurdle for Nicky Henderson and JP McManus.

Meanwhile, McManus will have eyes on Navan, as the Meath venue stages the Grade 3 FlyingBolt Novice Chase at 3.58pm. A 34 lengths winner of a beginners chase last time out, Gentleman De Mee, owned by McManus, is the one they all have to beat with the Willie Mullins trained 6-year-old a very short-priced favourite (1/4) for today’s feature race in Ireland. 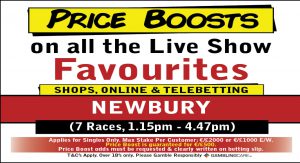 Newbury’s Saturday card opens up with leg 3 in the popular Veterans Chase Series at 1.15pm, while the 1.50 is a very valuable contest over the larger obstacles, as the Grade 3 Greatwood Gold Cup Handicap Chase is staged.

Venetia Williams is operating at over 23% with her strike-rate so far this season and saddles up the joint-favorite, Farinet (9/2), who has won 2 of 5 starts in Britain, having been picked up from France. One of those British wins was a listed Novices Handicap Chase over today’s trip of 2m4f at Sandown last March.

After a difficult start to the new year, Paul Nicholls yard is back to its best with a 10-42 record over the past fortnight, and the Ditcheat handler will be eyeing another winner in a race that has been very good to him with 9 wins in the contest since 2002. Nicholls sends out Tamaroc Du Mathan (9/2), whose Novice form includes a Grade 2 win and a runners-up finish behind a certain Shishkin. The 7-year-old is making a second start after a wind operation and has slid down the weights to a potentially handy mark.

Doncaster gets underway at 1.45pm, with a Listed Mares Novices Hurdle to follow at 2.20pm. Dan Skelton’s Get A Tonic (2/1) is entered in the Mares Novices Hurdle at the Festival and she seeks a third win over the timber today, while Hughie Morrison’s Miss Fairfax (9/4) is on a hat-trick mission having beaten a subsequent winner at Catterick last time out.

Plenty of good handicaps follow on the Doncaster card, which is rounded off with a bumper at 5.15. The Twiston-Davies’s will have high hopes with Spring Meadow in the concluding race, as he was an encouraging fourth on bumper debut and being a half-brother to the stables recent Grade 3 New Years Day Handicap Chase winner at Cheltenham, Vienna Court, Spring Meadow (Evs) could be set for a step forward in what is a bumper lacking in experienced rivals.

Southwell will carry the flame this evening from 5pm, all the way through until 8.30pm.

Click here, for the latest prices on today’s racing.