The 12.30pm kick-off in the Premier League on Saturday September 3rd is the Merseyside derby, Everton v Liverpool.

Preview by Will Reilly.

This will be the 241st Merseyside derby. Liverpool have won 97 of the previous 240, Everton have won 67 and 76 have been drawn.

On the 23 occasions the game has been played at Goodison Park this century, the sides have been separated by more than one goal just nine times.

The Merseyside derby has seen more red cards (22) than any other Premier League fixture.

Liverpool won this fixture last year but not since 2008 have they secured successive victories at Goodison Park.

Having narrowly avoided relegation last season, it’s fair to say that the Toffees are in a transitional stage. They have yet to win this season in the league in five games, although they have drawn their last three matches, each of them ending 1-1.

They have yet to keep a clean sheet this season in the league but have only conceded more than one goal once (v Arsenal when they lost 2-1).

After a sketchy  start to the campaign – two draws and one defeat in their first three league games – Liverpool have now won their last two, both at home – 9-0 v Bournemouth and 2-1 v Newcastle, although they secured that victory over the Toon with the last kick of the match.

They now sit sixth in the table but a win against their city neighbours would move them up to third ahead of Saturday’s 3pm games.

Liverpool have lost one of their last 24 league games (18 wins) but have kept just two clean sheets in their last nine league games and just one in five league matches this season.

Scoring goals is usually not a problem for them, though, and they have failed to score in just two of their last 25 matches in all comps and have scored 2-or-more goals in 19 of the 25.

Mo Salah remains Liverpool’s most potent goal threat (122 goals in 198 Premier League appearances), including two in 5 league games this season and five in his last 11 league starts. He has scored three goals in the last two Merseyside derbies played at Goodison Park.

Robert Firmino, however, has scored three goals in Liverpool’s last two matches so approaches the match with plenty of confidence.

Liverpool have conceded the first goal in eight of their last nine Premier League matches. 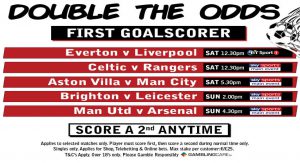 Everton last won this fixture in 2010 (2-0) but, in the 11 league meetings since then at Goodison Park, Liverpool have won three and eight have been drawn. In fact, eight of the last 10 have been drawn.

Everton have failed to score in five of the last eight and, overall, have won just once against Liverpool in their last 26 meetings with them (12 draws, 13 defeats).

Anthony Gordon remaining at the club despite a big offer from Chelsea was good news for the Toffees. Recent signing Neal Maupay could make his debut, as could Idrissa Gueye, who rejoined the Toffees this week, but missing out through injury are Yerry Mina, Andros Townsend, Ben Godfrey, Dominic Calvert-Lewin, Mason Holgate and Abdoulaye Doucouré.

Darwin Núñez is available again having served a three-match suspension but Jordan Henderson is reported to be struggling with a hamstring injury. Ibrahima Konaté, Alex Oxlade-Chamberlain and Thiago Alcântara are also nursing injuries. Loan acquisition Arthur Melo is unlikely to be involved, as per head coach Jürgen Klopp on Friday. Diogo Jota is available, something that left Klopp musing over the prospect of having five strikers in the matchday squad.

Given the numbers above then Everton +2 at 7/10 might represent some value.

Given that it’s a Double The Odds on First Goalscorer Bets match with us, Mo Salah must come into the reckoning to notch first. His price is 3/1.

CHECK OUT our PRICE BOOSTS (see below) on the MATCH… 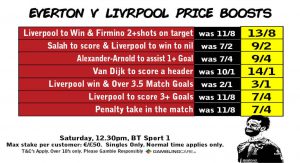 ****All prices correct at the time of publication