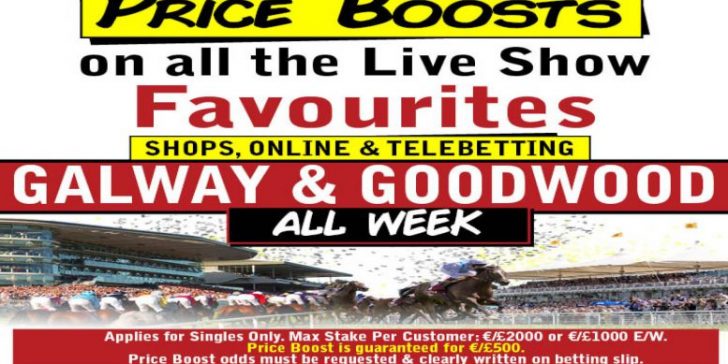 It’s one of the biggest weeks of racing of the year as Glorious Goodwood gets underway while the Galway Races roll onto day two of seven at Ballybrit! The opening day of the Galway Festival finally saw Ireland’s greatest amateur jockey Patrick Mullins win the Connacht Hotel Handicap, as Grade One winning hurdler Echoes In Rain scooped a big pot in the 2m1f flat contest for trainer Willie Mullins.

Meanwhile, Shane Foley and Jessica Harrington enjoyed an opening day treble at Galway with today’s card once again getting underway at 5.10 with the Listed COLM QUINN BMW Novice Hurdle for four-year-olds. Recent Punchestown maiden hurdle winner Tax For Max heads the betting for Paul Townend and Willie Mullins. The County Carlow handler also has a live chance with Jon Snow in the following race at 5.40 as the Mrs Susannah Ricci owned gelding bids for a winning chase debut having scored three times over hurdles.

The day two feature at Galway is the COLM QUINN BMW Mile Handicap (Premier Handicap) with over €70,000 to the winner.

As for Glorious Goodwood, their five-day summer festival begins at 1.50 this afternoon with the eagerly awaited Group One Goodwood Cup the opening day highlight at 3.35. Stradivarius has won this famous race four-times and will bid for number five in what could be his final appearance. The 8-year-old could bow out without his old partner in crime as Frankie Dettori sits this one out in order to allow Andrea Atzeni to take the ride for John & Thady Gosden.

Ascot Gold Cup winner Kyprios heads the betting as Aidan O’Brien’s colt seeks a four-timer while Trueshan will bid to follow up on one of the great handicap performances having given chunks of weight away to land the Northumberland at Newcastle under Hollie Doyle last time out. The ever popular Princess Zoe adds further Irish interest to this Group One affair. 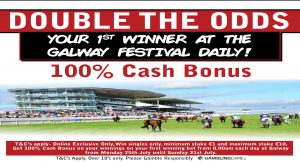 Don’t forget, Bar One Racing are Price Boosting the live show favourite in each and every race at BOTH Glorious Goodwood and Galway this week! These boosts are available across all platforms (shops, online, telebetting) and that’s not all! BarOneRacing.com are also offering Double The Odds on your first winner at Galway daily while there are numerous Extra Place races on offer daily as well as tones of other great concessions (see our latest promotions here).

Latest prices and racing markets can be found here.